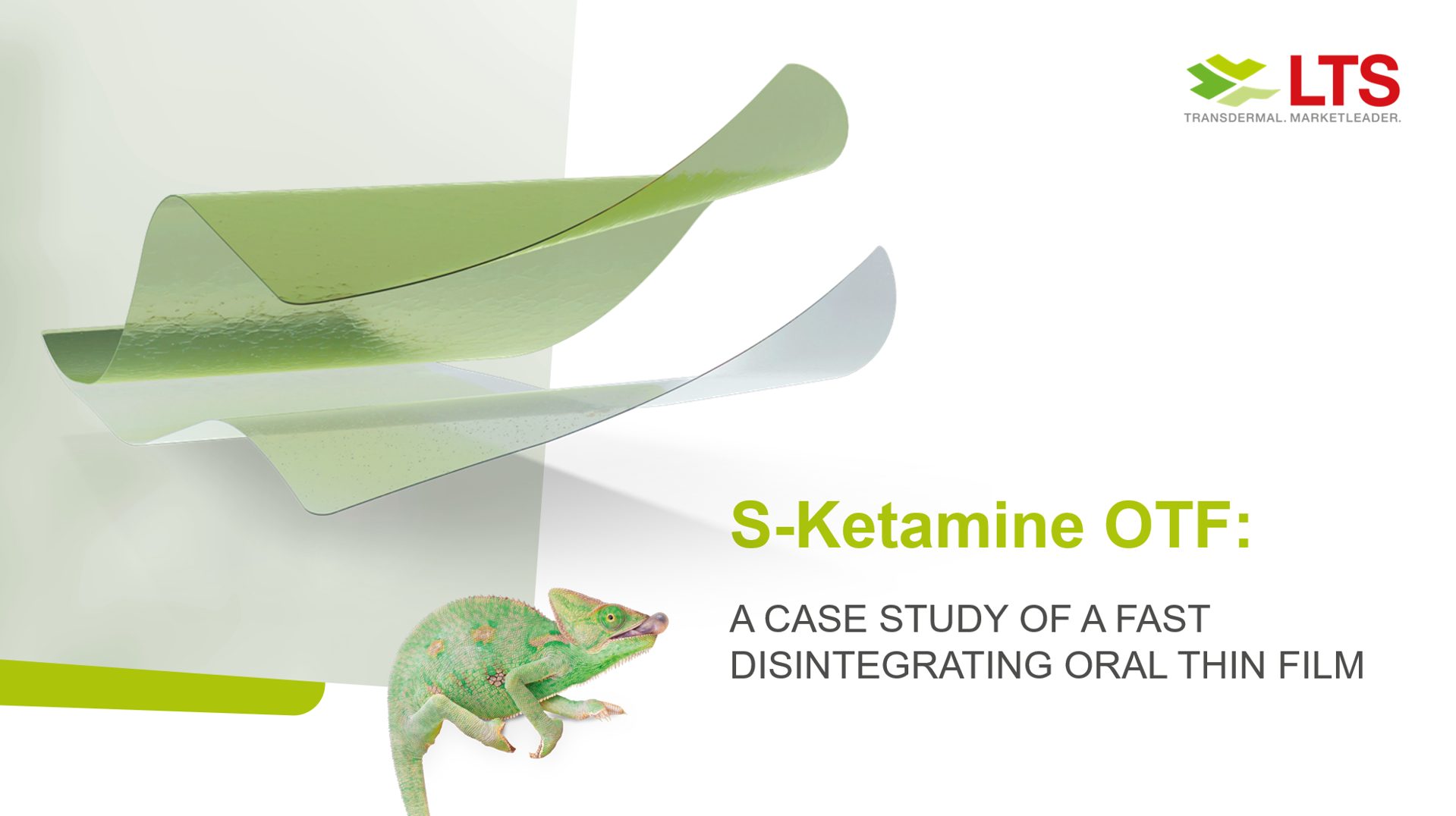 Ketamine is a versatile drug administered via various routes, predominantly intravenously, for a variety of indications, including anesthesia, pain relief and treatment of depression. Here, we report on the pharmacokinetics and pharmacodynamics of sublingual and buccal fast-dissolving oral-thin-films that contain 50 mg of S-ketamine in a population of healthy male and female volunteers.

Twenty volunteers received one or two of the oral thin films on separate occasions in a randomized crossover design. The oral thin films were placed sublingually (n = 15) or buccally (n = 5) and left to dissolve for ten minutes in the mouth, during which the subjects were not allowed to swallow. For six subsequent hours, blood samples were obtained for measurement of plasma S-ketamine, S-norketamine and S-hydroxynorketamine concentration. In an adjacent study, this period was used to measure antinociception using three distinct pain assays – electrical pain, pressure pain and heat pain – and drug high was scored on an 11-point visual analogue scale. In both studies, after six hours, 20 mg S-ketamine was infused intravenously, and blood sampling continued for another 2-hours. A population analysis was performed in NONMEM to construct pharmacokinetic and pharmacodynamic models of S-ketamine and its metabolites S-norketamine and S-hydroxynorketamine. P-values < 0.01 were considered significant.

A fast onset could be achieved with tmax values of 18.8 min. (50 mg OTF) and 19.1 min. (100 mg OTF). S-ketamine bioavailability was 29 % for the 50mg dose), with a 20% lower bioavailability of the 100 mg oral thin film dose relative to the 50 mg film – although this difference did not reach the level of significance. 80% of S-ketamine was metabolized into S-norketamine, leading to high plasma levels of S-norketamine following the oral thin film application, with 56% of S-ketamine finally metabolized into S-hydroxynorketamine. No differences in pharmacokinetics were observed for the sublingual and buccal administration routes.

The OTF was safe and side effects were related to ketamine itself and not to the thin film. Despite low bioavailability the S-ketamine OTF produced potent antinociceptive responses in all three assays lasting 2-6 h, effects that were related to S-ketamine and not to its two metabolites, S-norketamine and S-hydroxynorketamine.
Conclusions: The S-ketamine oral thin film is a safe and practical alternative compared to other dosage forms that results in relatively high plasma levels of S-ketamine and its two metabolites while also producing long-term antinociception in all three nociceptive assays, with side effects inherent to the use of ketamine.

Over the last decade, low-dose ketamine has gained in popularity, with indications for the treatment of chronic pain and therapy-resistant depression.1 Since its discovery in the early 1960s, ketamine has been administered mostly via the parenteral route for the induction of anesthesia and procedural sedation. With a broader range of indications and pre-hospital and out-of-hospital use of ketamine, the need for skilled venipunctures presents a hurdle for chronic and repeated administration. To overcome this problem, different routes of ketamine administration have been studied extensively, including inhaled, oral, sublingual, nasal, subcutaneous, intramuscular and rectal. All these routes have advantages as well as drawbacks. For example, oral dosing, while simple to administer, results in slow absorption and is largely subject to intestinal and first-pass metabolism, with unpredictable bioavailability (7-25%).2 Others, such as the subcutaneous or intramuscular administration routes, are invasive and also result in a relatively slow absorption.2,3

Here we study the pharmacokinetics and pharmacodynamics of sublingual and buccal fast-dissolving oral thin films (OTFs) that contain 50 mg of S-ketamine – one of the stereoisomers of ketamine. We present the results of both a pharmacokinetic analysis of the concentration-time curves following sublingual or buccal administration of 50 mg or 100 mg S-ketamine OTF in healthy volunteers as well as the results of pharmacodynamic analyses which explore two end points: nociception, by testing three distinct pain assays (pressure pain, electrical pain and thermal pain); and drug high, one of the psychotomimetic effects of S-ketamine. We considered the parent compound and its metabolites, S-norketamine and S-hydroxynorketamine, in the analysis.

More about this topic

There are no barriers to working with us, only opportunities.

With teams of experts on hand across the globe, we are here to support your next innovative drug delivery development programme.